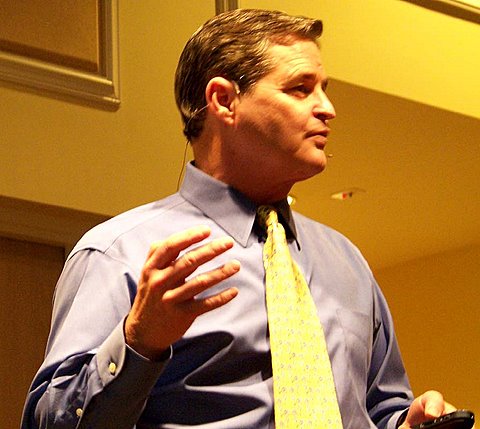 Michael Maibach is a seasoned professional in global business diplomacy, with successful careers at the European-American Business Council, Siebel Systems, Intel and Caterpillar.
EABC From 2003 to 2012, Mr. Maibach was President & CEO of the European-American Business Council. He grew the Council’s membership from 7 to 75 companies, and opened the EABC Brussels office. The EABC managed ~50 Washington, Ottawa, Brussels and London programs annually. The Council staffed 10 Trans-Atlantic Policy Groups. Mr. Maibach is a Fellow in the International Academy of Management.

Board Service Mr. Maibach is a former Board member of the American Electronics Association, the Information Technology Industry Council, the National Association of Manufacturers, the Tocqueville Forum/Georgetown University, BritishAmericanBusiness, the Center for the Study of the Presidency… and the World Affairs Councils of America. He also served as Senior Fellow of the Aspen Institute 21st Century Manufacturing Program, and on the Optimos, Inc. Board of Advisors. Today he serves on the Boards of the Witherspoon Institute, the Washington Jefferson & Madison Institute, the Faith & Law Institute, the John Jay Institute, the Caesar Rodney Institute, the Foreign Policy Discussion Group, the James Wilson Institute, and the Advisory Boards of the Institute of World Politics, the Center for Policy On Emerging Technologies, Baylor University/Washington, and the World Affairs Council of Washington DC.

Education Mr. Maibach earned a BA & MA from Northern Illinois University. While at NIU, he was elected to the DeKalb County Board, the first person elected to public office under 21 years of age in US history. He earned a BA from California State University, a BS from American University, an MA from Georgetown University, and an MA from the Institute of World Politics (pending language exam). He did graduate work at Oxford and Cambridge Universities, as well as the Universidad Ibero-Americana/Mexico and the Institute for International Studies/Japan. Mr. Maibach has lectured at 40+ US and European universities, 30+ World Affairs Councils, and was an Adjunct Professor at the Anglo-American College in Prague. Currently enrolled in Ashland University’s American History & Government MA Program. Mr. Maibach has published 70+ essays, writes poetry, has visited 64 countries, and cycled or hiked 18 Backroads trips. He is a member of Christ the King Church/Alexandria. Fluent English, conversational Spanish.